by Steve White & The Protest Family 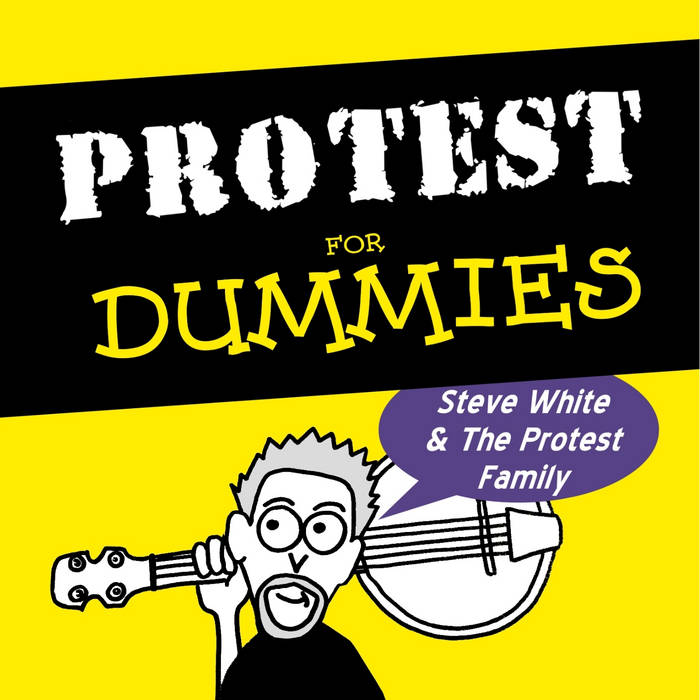 webhex There's no such thing as a protest singer... Favorite track: A Song for Sonja.

“We're a hardworking band, we're a hardworking family” Steve and the band declare on this, the Protest Family's third studio album. Despite the band's steady gig schedule since their formation in 2009, this is not self-praise. Instead it's a barbed attack on successive governments' attempts to co-opt the language of the working class and to divide us into strivers and skivers.

Protest For Dummies is an unashamedly political album that nonetheless never hectors or lectures but will make you laugh, cry, tap your foot and sing along.

Band leader Steve can still be found every summer hosting the unplugged sessions at the Tolpuddle Martyrs Festival, joined by sidekick Funky Lol Ross whose mandolin and electric guitar do so much to shape the band's sound. Veteran bass player Doug E Harper continues to provide the foundations that the whole album's built on, while award-winning banjo player Russ Chandler's presence once again makes this the band's most-settled line-up.

The two-year period that this album was written over saw a change of government whose programme gets set out in rhyme in God Save The Queen's Speech, increasing attacks on the welfare state and a heightening of the Syrian refugee crisis, which as the band are quick to point out is much more of a crisis for people fleeing war than for the governments of their host countries. Would St George have got past the Calais Jungle, they ask. Their tales of the times take in fox hunting, more UKIP gaffes and the media's treatment of Jeremy Corbyn, re-told as a wrestling match. Steve turns his attention away from the band's Walthamstow base to bring us news from the northern end of the borough too. That place where the people who vote for Iain Duncan Smith live.

Musically the band are still occupying that space that's neither punk nor folk but at the same time is both, keeping the company of the likes of The Men They Couldn't Hang and The Levellers while still earning comparisons with The Clash, Ian Dury and Billy Bragg.

What's that you say? The world's gone to hell in a handcart? Steve White & The Protest Family know a song about that.